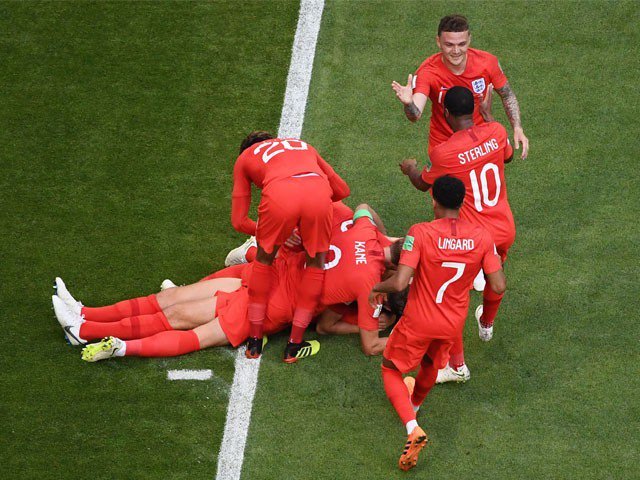 It didn’t have anything like the drama of the Colombian shoot-out, nor was it quite the spectacle when an England team beat Cameroon at this stage in 1990. And it was nowhere near as controversial as their progression from the quarter finals against Argentina in 1966.

It didn’t have anything like the drama of the Colombian shoot-out, nor was it quite the spectacle when an England team beat Cameroon at this stage in 1990. And it was nowhere near as controversial as their progression from the quarter finals against Argentina in 1966.

But make no mistake. In the Samara Arena, situated on the banks of the River Volga in a far-flung corner of the sprawling Russian Motherland, an England team made history.

Few gave them any serious chance when they left for Russia last month. Now they will contest a World Cup semi final on Wednesday night in Moscow. It will be only the third time they have done so since England deigned to appear at this tournament in 1950.

A young team which seemed devoid of real ego or heavyweight stars a month ago will now forever go down as one of the best.

Gareth Southgate, a seemingly unassuming man yet deceptively determined, who was parachuted into this job amidst chaos twenty-two months ago, will join Sir Bobby Robson as the only Englishman to guide a team to this stage of the World Cup in foreign territory.

What is truly enticing is the realistic prospect that he might go one better than Sir Bobby, a man who would visit him when he was struggling to find his feet at Middlesbrough manager. He has come a long way since then, Southgate, as he bestrides the world stage now.

His team have travelled far too, scaling previously unimagined heights. Harry Kane, of course, has been the breaththough act though this wasn’t so much his day.

But Harry Maguire is a secret no more. The world is awake to his talents, which go far beyond his headed goal. And Jordan Pickford has grown, figuratively if not literally in this tournament. He may always be 6’1” but his riposte to Thibaut Courtois questions about his height have been perfectly timed.

Sweden were extraordinarily limited and initially unambitious and yet it still took three wonderful saves from Pickford to get England over the line. And that the game was devoid of tension by the end, virtually a stroll, was a credit to the goalkeeper.

Of course, all should share credit. Though Sweden were poor, they are a team that has disposed of Holland and Italy in qualifying and who got rid of Germany from the group stages.

England managers have been photoshopped into turnips by Swedes before now so the fact that this team made light work of this fixture was a testament to their mental strength.

That said, England started tentatively, like they were suffering from a collective brain freeze form the magnitude of the occasion and the failure of an opponent to engage. The early passes from Ashley Young and Dele Alli betrayed the nerves which seemed to be suffocating England.

There was no high press, nor panache. At times the game resembled a pre-season Championship friendly, with the Brazilians presumably bemused that one of these teams would be contesting a semi final and they wouldn’t.

It took 19 minutes for England to find their feet with Keiran Trippier playing nicely out from the back and finding Raheem Sterling. Suddenly Sterling was accelerating away, an injection of energy into a soporific occasion. He beat his man and then went past Sebastian Larsson and, with a shooting chance opening up, ran into Harry Kane and ceded the shot to him, the England captain shooting wide from the edge of the box.

It was an least a sign of life. Ashley Young started beating Emil Krafth down the left and on 23 minutes a move starting with Jordan Pickford found its way via Young and Kane to Sterling again, whose striker brought hopeful shouts for a handball against Emil Forsberg.

Referee Bjorn Kuipers rightfully ignored that but it was the first real sign of England’s ability to play with fluidity and pace from the back. Until then, Sterling apart, no-one had moved with anything like the urgency required to unsettle Sweden.

That said, it took a familiar route for England finally to break Swedish resistance. Their first corner kick award on 32 minutes saw Young tee it up and the usual suspects of Harry Maguire, John Stones, Jordan Henderson and Kane amassed at the back of the box.

The only variation in England’s routines was that Dele and Sterling joined them initially. As Young struck the ball, they all scattered and it was enough to confuse Sweden because, in the melee, Maguire was lost, He spun away and his eyes never left the ball. Poor Forsberg was left trying to out-jump him but it was vain task. Maguire rose, connected with his head directed the ball firmly home with a magnificent header.

It didn’t quite bring the release for which England yearned but there was a better finish to the half with Sterling twice breaking free.

On the first occasion, he was offside but when Henderson lifted the ball through on 45 minutes, he sprinted free and took a great touch down. Only the alert reactions of Robin Olsen in goal stopped him skipping round the keeper. By the time Sterling then had to turn to shoot, the familiar figure of Andreas Granqvist was there to block.

Still, these were hopeful signs.

Nevertheless it was Sweden who presented the first sign of danger in the second half. Ludwig Augustinsson swung in an excellent cross on 47 minutes and Marcus Berg rose above Young and directed his header goalwards. Only the excellence of Pickford leaping to his left prevented an equaliser and a Swedish revival.

It was an apposite warning. But also wholly out of character for the game up to that point. England were establishing a foothold. Young’s free kick on 52 minutes found Maguire at the back post – the default England set piece – and his header across was met with spectacular if imperfectly-executed bicycle kick by Sterling.

But there was a patience to England’s play and a degree more craft. So when Trippier had the chance to swing another cross in on 58 minutes he instead opted for a more subtle cut back to Lingard.

He, in turn, dinked the ball over the Swedish defence and there was that run from Dele Alli that Southgate has been so keen to unleash. No Swede had picked him up so his was a fairly simple task to head home. Half the team celebrated with Dele and, fittingly, half with Lingard whose cross was so precise.

Sweden had been so limited and unadventurous that it seemed as though the game might have been won in that moment.

Yet within minutes of the re-start, Sweden were breaking down the left and when Berg touched the ball back to Viktor Claesson a goal seemed inevitable, He struck it well enough but Pickford produced another outstanding save, down to his left to parry away.

Sweden, their World Cup slipping away, had sprung into life When Claesson burst down the left on 72 minutes and crossed for Berg, the centre forward took a touch and struck a rising shot which Pickford again met superbly, touching it over.

It was save that would break Sweden, never again would they truly threaten.

Their race was run. England’s, thrillingly and unimaginably, is far from done.