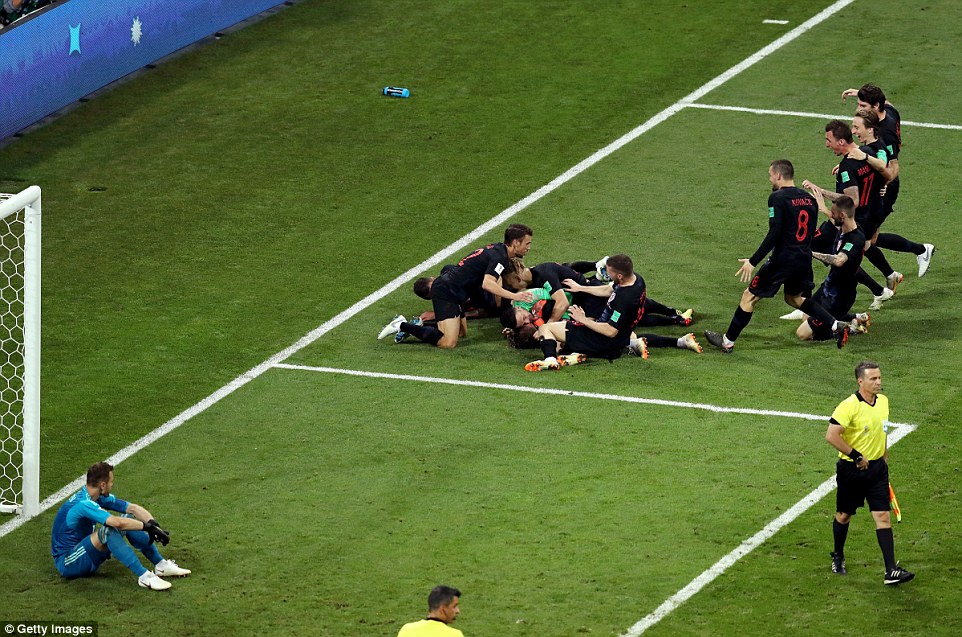 Russia’s emotional and stubborn journey through their own World Cup over ended in heartbreak just before midnight on the Black Sea when they lost a penalty shoot-to Croatia at the Fisht Olympic Stadium.

Russia’s emotional and stubborn journey through their own World Cup over ended in heartbreak just before midnight on the Black Sea when they lost a penalty shoot-to Croatia at the Fisht Olympic Stadium.

Croatia will now face England in the last four in Moscow on Wednesday night and on this evidence there is nothing particular for Gareth Southgate and his players to fear. Luka Modric and his team-mates will certainly present England with a different test to any they have faced so far in Russia. They will play on the front foot and attempt to take the game to England, something teams like Sweden, Colombia, Panama and Tunisia have not done.

However, Croatia will be tired after this gruelling and emotional night. They have played two lots of 120 minutes in the knockout stages, winning a shoot out against Denmark in the last sixteen, and that may take its toll in three days’ time.

For Russia, this was a tough night. They had come back from the dead with an equaliser from defender Mario Fernandes seven minutes from the end of extra-time to force the shoot-out. But sadly it was the Brazilian-born defender who missed the crucial kick in the shoot-out.

But after Russia had recovered from the shock of Fedor Smolov missing their first kick with a successful strike from Alan Dzagoev, Fernandes dragged his team’s third one horribly wide meaning that subsequent goals from Sergey Ignashevich and Daler Kuziaev were rendered meaningless when Rakitic converted Croatia’s final kick.

Croatia had earlier looked to be on their way through after a header by Vida had been nudged in to the net by substitute and former Manchester City and Tottenham defender Vedran Corluka in the first period of extra time.

But then the Russians were awarded a free-kick for handball on the edge of the penalty area in the 113th minute and when Dzagoev whipped it in Fernandes rose to head it in to the corner.

Croatia had dominated the 90 minutes of normal time but had fallen behind when Russian golden boy Denis Cheryshev scored from 25 yards on the half hour.

Zlatko Dalic’s team struck back almost immediately through Andrej Kramaric but the closest they came to winning the game in normal time came when the disappointing Ivan Perisic struck the post when he should have scored in the 61st minute.

After frustrating Spain and then breaking them in a penalty shoot-out in the last round, there was no secret about how Russia would play here. Stanislav Cherchersov’s team do not share the coach’s charisma and here they sat deep from the outset in a bid to draw the sting from Croatia and possible strike on the break.

Russia are a physically strong side and athletic, too. They rely on that physicality to work opponents at set pieces and are reasonably good at it, too. Here, though, they struggled to cope with their more skilful opponents in the early stages.

Whereas Spain had played static, slow, predictable football against Russia in Moscow last weekend, Croatia moved the ball more quickly, created angles and as a result asked Russia a good deal more questions when they were in possession.

Early on it seemed as though Croatia would score. They enjoyed the territory and the possession and Luka Modric and Ivan Ratikic – both schooled in Spain’s Serie A – were able to move the ball dangerously around the final third of the field.

Crucially, though, they didn’t break through and that soon gave Russia hope. Certainly there were opportunities as Ante Rebic escaped on the right side to draw a low save at his post from Igor Akinfeev and then the same player headed over when he may have done better after Liverpool’s Dejan Lovren won a header from a corner.

Mario Mandzukic then missed the chance of the half, miscuing first time from close range in the 11th minute after a low cross from Sime Vrsaljko found him a yard of space.

There was also a header wide from Ivan Perisic but slowly Russia were creeping in to the game and beginning to carry a threat. The noise from the home crowd down on the Black Sea was tremendous every time Russia broke in to the Croatia half and when they took the lead out of nothing just after the half hour it felt as though the roof may come off.

Cheryshev has led a charmed life through his tournament so when he exchanged passes with Artem Dzyuba and held off Modric before beating Danijel Subasic frrpom 25 yards the person who was probably least surprised was the goalscorer himself.

It was a thumping drive in to Subasic’s top right hand corner and the AS Monaco keeper had no chance.

The goal rocked the Croatians a little and it took them a while to recover. But their equaliser was a fine goal eight minutes later as Mandzukic escaped down the left and found Kramaric who headed in from within a crowd of red shorts from eight yards.

Strangely the goal didn’t lift Croatia as much as they may have hoped and they didn’t create another good chance until the hour when Ivan Perisic picked up the pieces of a scramble inside the penalty area and screwed a right foot shot against the inside of the post when it looked to be going in.

Russia were still a threat in the air and almost immediately Dzyuba rose at a corner to head down and up in to Subasic’s midriff.

As time went on Croatia continued to dominate without having everything their own way. Russia were proving as stubborn as we expected them to be and too often when the Croats reached the edge of their opponents’ penalty area their final pass or first touch failed them.

Russia substitute Aleksandr Erokhin headed a great chance over the bar from seven yards with 18 minutes left and as we reached the final stages of the 90 minutes it looked increasingly possible that the host nation may snatch the result.