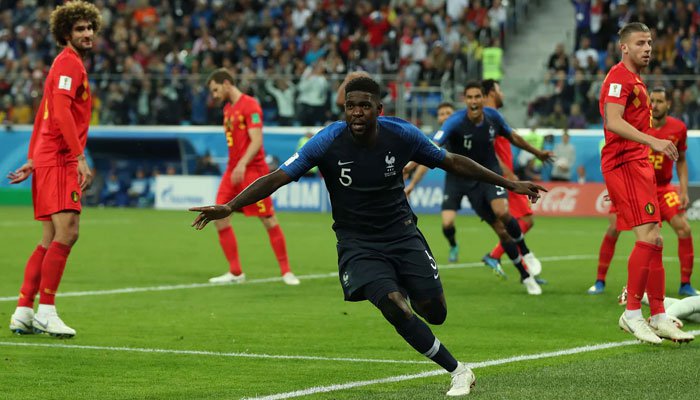 A game as fabulous as this should not really have been settled by something as prosaic as a corner.

A game as fabulous as this should not really have been settled by something as prosaic as a corner.

There is nothing wrong with corners. They have been the cornerstone of England’s whole World Cup campaign.

But this wonderful, intricate and skilful game of football deserved something more memorable with which to decorate it.

Instead, the whole thing came down to one of football’s oldest facets, a battle of strength and will between two big athletic men at the near post.

This one was won by Frenchman Samuel Umtiti over Marouane Fellaini and as the Barcelona defender’s header crashed in to the goal at the near post in the second half Belgium’s carefully constructed World Cup campaign collapsed around their ankles.

So it will be Didier Deschamps’ team who await the winner of England and Croatia in Sunday’s final and whoever they play France will start as favourites. Against a beguiling and dextrous Belgium side, France began slowly here but grew inexorably and purposefully in to the game and by the end were worthy and courageous winners.

France did not begin this World Cup with any great elan but they have got steadily better and have now advanced through the tough half of the draw by beating Argentina, Uruguay and now Belgium.

They are three teams of substance and three victories from which France will take great confidence. The likes of Paul Pogba. N’Golo Kante and the mesmerising PSG speedster Kylian Mbappe were magnificent here as for the first time all month Belgium found themselves neutered

We should all feel for Roberto Martinez and Belgium as they have brought much to this World Cup. At times in the first half they looked as though they would unlock France and had they scored first they may have walked away with things.

But for all their possession and neat patterns they couldn’t find a way to regularly hurt France. Hugo Lloris made only one significant save all night, that from a first half shot from Belgium defender Toby Alderweireld.

Martinez may ask himself why he stuck with the bespoke system he used to beat Brazil rather than revert to his usual back three. In the centre of the field, meanwhile, Tottenham’s Moussa Dembele was run ragged by Pogba and Kante.

He was the weakness of this Belgium eleven and France exploited his flat footedness and his lack of pace on the turn brilliantly.

But this was a game of fine margins and a game of high quality. It could have gone either way. We saw the best two teams in the World Cup here and one of them had to lose.

So often cagey and dour at this stage of a World Cup, this was not that. This was joyful and expressive and the only surprise was that we didn’t see more goals.

For Belgium, Kevin de Bruyne and Eden Hazard ran directly with familiar poise and wit while the French countered with bursts of pace of their own. Belgium started fast but could not maintain it.

Pogba and Kante began breaking up Belgium possession with a surgeon’s precision and looked immediately for the lightening feet of Mbappe or the manly heft of Olivier Giroud.

Early on it was Belgium’s game. Hazard and De Bruyne found space between the blue lines and their play just lacked a smart run from centre forward Romelu Lukaku or a kind bounce to bring them some tangible joy.

Hazard shot across goal with his left foot in the 16th minute while a wicked curling shot from the Chelsea player looked destined for the top corner before it struck French defender Raphael Varane on the back and span over.

It seemed only a matter of time before Lloris got busy in the France goal and sure enough he was called upon midway through the half.

A corner from the right dropped to Alderweireld 14 yards from goal and the Tottenham defender produced a dangerous half-volleyed shot on the turn which his Premier League team-mate had to turn round the post at full stretch. It was a nice height for Lloris and he got two hands to it but it was still a good save.

So the Belgian threat was clear but so, as France grew in to the game, was their vulnerability. Early in the tournament when they beat Tunisia 5-2 there were signs of uncertainty at the heart of the Belgium defence and when France won a corner courtesy of a Giroud turn and deflected shot in the 51st minute Umtiti lumbered forward to earn his place in French history.

Replays showed his header may have brushed Fellaini’s curls on the way in. The Manchester United player looked bereft afterwards but his pain should be eased by the knowledge that he has had a good World Cup.

There had been signs before that goal that the French threat was growing. Thibaut Courtois’ foot had denied Benjamin Pavard late in the first half while Antoine Griezmann had also come close.

Martinez eventually changed things and when Dries Mertens replaced the drowning Dembele Belgium came again courtesy of a Fellaini header and drive from Axel Witsel. But France were emboldened by a sense of opportunity by this stage and would not let Belgium through.

They defend well, this French team and that should not be overlooked. At the business end of this entertaining World Cup, it remains a fundamental skill. As does the taking of good corner kicks.