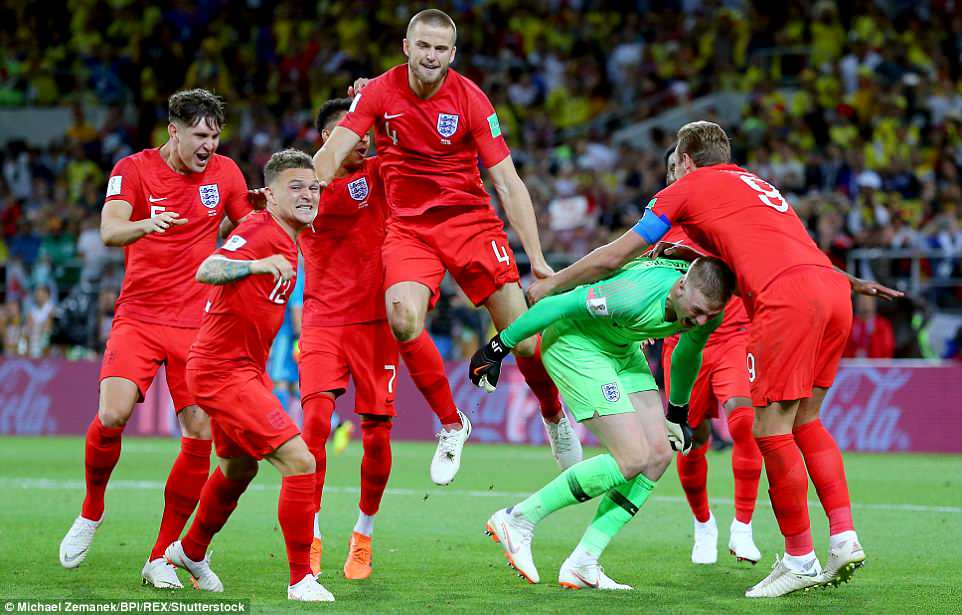 There it is. The first time ever. England through on penalties in a World Cup tie. It might be time to start dreaming, people. This doesn’t happen every day, you know.

There it is. The first time ever. England through on penalties in a World Cup tie. It might be time to start dreaming, people. This doesn’t happen every day, you know.

Or every year, decade or century. England have been taken to penalties on three occasions in this tournament, and lost every time. When Jordan Henderson’s third was saved by David Ospina here, it looked as if the nation was due more of the same. More torture; more heartbreak; more wry songs making light of pain and hurt, to mask how we really feel.

But on Tuesday night it was different. Mateus Uribe and Carlos Bacca missed for Colombia; Kieran Trippier scored for England. Suddenly it was all down to one man. Who would it be. Jamie Vardy, who takes them for Leicester, was unused. Jesse Lingard had apparently been banging them in during practice. Walking forward from the group…Eric Dier.

Dier, ordinary against Belgium in his only start of the tournament. Dier, who had a pass completion rate of less than 25 per cent in his first 24 minutes on the field here. Dier? Anchor man penalty taker? Had we taken leave of our senses?

Apparently not. Gareth Southgate, more than any England manager, know the agony of the shoot-out. That was one of the reasons he had his squad going through the routine, day after day, in training. If Dier was the man to hold his nerve, there must be reason, number, to back that up.

Let’s be truthful. It wasn’t the cleanest. A bit scuffed and Ospina got a hand to it. But not enough. There it was, in the net. There England were: in the quarter-finals. And all down to penalties. Not just the shoot-out, but the one Harry Kane took that should have sent put England through in normal time. The penalty that took what seemed like forever.

About the nation watching, at home. About kids in school looking up to him. And yes, it’s only a game of football. But for three minutes and 31 seconds it must have felt like the world.

In the time elapsed between referee Mark Geiger pointing to the spot, and Kane converting the penalty that came so close to taking England to a World Cup quarter-final with Sweden in normal time, Kane must have tried to disappear into his little bubble of familiarity. Tried but, probably, failed.

Mayhem was unfolding around him. Colombia appeared to regard the award as the start of a symposium, as if the whistle and the pointing gesture were merely the prelude to an opening address. Henderson, normally so cool, was shown a yellow card for flicking his head backwards towards an opponent who was particularly persistent in his attention. He made no contact, but it’s the thought that counts.

Finally, Kane stood over the ball, with only goalkeeper David Ospina in his path. Tottenham versus Arsenal, played out on the world stage. He has always loved that fixture. He waited for Ospina to make his move – to the left – and struck it straight down the middle, his sixth goal of the tournament, equalling Gary Lineker’s total for England at Mexico in 1986.

He has now scored in six games straight for his country. The last to do that was Tommy Lawton in 1939. Kane feels a little Lawton-like, a little old school, a bit of a throwback. But Lawton never knew pressure like this for his country. He never did three minutes and 31 seconds, with the nation at a standstill, heart in mouth.

And there was no let-up, no respite from there. One-nil isn’t a lead anyone is happy with going into the final ten minutes of a World Cup knock-out game. Better than trailing, of course. Better than shipping four as England did to Germany at this stage in 2010 – but not good for the nerves.

When Kyle Walker gave the ball away and Colombia broke in the 81st minute, there would have been a collective national scream. Juan Quintero fed Juan Cuadrado on the overlap – one of those Colombians with a score to settle against the English game – but his shot was snatched and flew over.

Changes was made, the tension increased. It felt as if it was happening. England were two games from the World Cup final and the first of them was against – not Brazil or Germany as envisaged – but Sweden. It was the chance of lifetime. Almost too much to bear: and then it wasn’t all over after all. It was as every England fan feared.

Mateus Uribe hit a shot from range that Jordan Pickford tipped wide magnificently. A Colombian corner. England could handle those, surely. Up came Ospina, against the judgement of the bench – particularly when Colombia have players the size of Yerry Mina on hand.

He was the target, and he was the man the corner found. He outjumped Harry Maguire and headed the ball down. It reared up and was misjudged by Kieran Trippier on the line, his header only helping it on his way. Colombia were level, against the odds. Yet for England is felt painfully familiar.

Gareth Southgate is not much given to demonstrations of touchline anger, so the sight of him gesturing to the fourth official, and slapping his forehand, is about as near as he would get to histrionics. It was plain he felt hard done by, though, and no wonder.

It is not often a referee acknowledges a player has used his head on an opponent and produces only a yellow card. It wasn’t Mark Geiger’s finest moment. FIFA have already been required to deny that he asked for Cristiano Ronaldo’s shirt as a souvenir in Portugal’s match with Morocco – and now it appeared he shook hands with Colombia’s Wilmar Barrios as they left the field for half-time, as Geiger was thanked for not sending him off. Deeply unimpressive from the American, once again.

Corners and free-kicks were already taking an age to deliver as players jostled and grappled, and Geiger delivered ineffectual lectures like a substitute teacher. Yet when Harry Kane was upended in the 40th minute, the shenanigans moved to a new level. Barrios, diminutive but effective in defensive midfield, appeared to run his head up the chest of Jordan Henderson and then butted him.

The Liverpool man may have made the most of the contact, falling instantly to the floor, but the contact and intent was clear. England players protested, Colombians reacted, there was an unsightly melee.

Geiger chose not to consult VAR, so presumably had seen what happened, but showed Barrios only a yellow card. It was a bizarre call. There could not have been a penalty as the ball was still, technically, dead – but red card offences can be committed during a break in play and a headbutt is surely one of them. It was nothing, or it was a red: Barrios got away with one there.

From the free-kick Kieran Tripper curled one wide of the near post, and England went in without the breakthrough their early play deserved. They had the better chances, and the lion’s share of possession, even if Colombia came into it more as the half wore on.

In the sixth minute the giant centre-half Yerry Mina – coming through at Barcelona and no doubt the envy of many Premier League clubs – handled tackling Raheem Sterling on the left. Ashley Young took the free-kick from a tight angle and forced a good save from David Ospina, punching clear of Colombia’s goal.

Soon after, a neat interchange of passes saw Jesse Lingard release Tripper on the right an d his cross was just too rich for Harry Kane at the far post, unable to get his header down and watching as it looped onto the roof of the net.

Colombia’s opportunities were rare, mostly hopeful pot shots. Johan Mojica hit one horribly high and wide after 22 minutes, and 11 minutes later their best forward, Juan Quintero was similarly wayward from the edge of the area. Just before half-time he forced the first save of the game from Pickford in England’s goal, teed up by Santiago Arias, but weak and easily stopped.