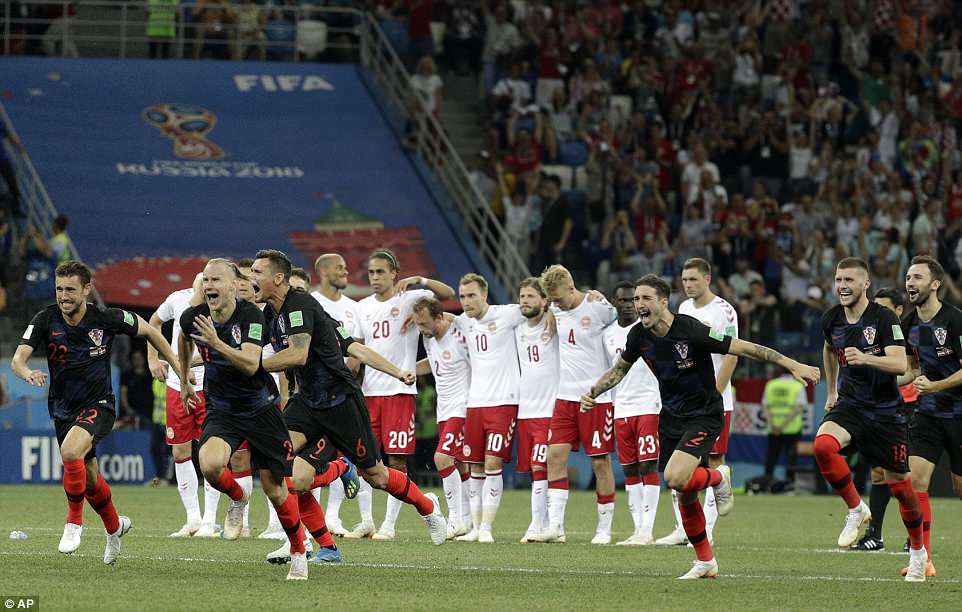 After the heroics of two goalkeepers, six missed penalties and a hatful of missed chances it was Croatia who took their place in the last eight of the World Cup.

After the heroics of two goalkeepers, six missed penalties and a hatful of missed chances it was Croatia who took their place in the last eight of the World Cup.

Ivan Rakitic scored the decisive spot kick after Danijel Subasic saved three from Denmark in what must be one of the worst set of penalties recently seen at an elite tournament.

Kasper Schmeichel also made three saves, two in the shoot-out and one six minutes from time, with his father Peter on his feet in the stands.

The teams were locked together at one-all and six minutes from a penalty shoot-out when Luka Modric released Ante Rebic and he skipped around Schmeichel.

Rebic was about to roll the ball into an open goal when Mathias Jorgensen scythed him down from behind.

Modric got up to take the penalty and Schmeichel saved, diving to his left and took this last-16 tie until a penalty shoot-out.

Modric had the bottle to take another and this time he scored.

Croatia move on to face Russia in a quarter-final in Sochi but they were far from impressive.

Two scruffy goals inside four minutes of total mayhem this promised to be a thriller.

But for the next couple of hours it set about proving why everyone is in such a tiss about this side of the draw.

There really is nothing extra special. There are teams who can have a good day. These include Croatia, as they proved against Argentina.

And there are teams that can be difficult to play against and yet there is no team to fear. And no team with experience of the late stages of an international tournament.

This last-16 tie was littered with mistakes, right from a breathless opening to the game with some amateurish defending and two goals inside four minutes.

Just 57 seconds had ticked by when Denmark took the lead.

An enormous throw, hurled deep into the Croatia penalty area by Ipswich defender Jonas Knudsen reached Jorgensen at the back post via Thomas Delaney and the Huddersfield centre-half had the presence of mind to focus on hitting the target.

He stabbed a firm side-footer through a crowd of legs, and Danijel Subasic threw down his left hand but the goalkeeper was only able to divert the ball under his body, against a post and into the net.

Denmark rejoiced as Jorgensen became the first Huddersfield player to ever score in a World Cup but the lead was wiped out within three minutes.

Croatia levelled when a scramble took hold at the other end of the pitch after a powerful charge down the right wing by Rebic.

Sime Vrsaljko opted for power rather than accuracy as he toe-punted a low cross from the right and the Danes self-destructed when an attempt to clear by Henrik Dalsgaard smacked teammate Andreas Christensen full in the face.

Chelsea centre-half Christensen, deployed by the Danes as a deep in midfielder, collapsed in a heap and the rebound spilled to Mandzukic who swept the bouncing ball past Kasper Schmeichel on the turn, without hesitation.

Such a frenetic tempo could not continue but a pattern of sorts was set.

Denmark would look most threatening from set-pieces and panic took a grip at the back when Croatia’s pushed forward.

Wideman Ivan Perisic and Rebic kept energy levels high in the first half and Modric probed with passes from midfield, but they often lacked composure in advanced area.

For what was Croatia’s first World Cup knock-out tie since the semi-final of France 98, boss Zlatko Dalic reverted to the same team which beat Argentina so convincingly.

Again, they dominated first half after hitting back but were unable to convert this into more goals.

Schmeichel, with his father Peter in the stands, saved from Ivan Rakitic and Perisic snatched at the chance which followed.

Dejan Lovren ought to have hit the target having climb to get his head to a free-kick delivered by Modric.

Rakitic didn’t failed to extend Schmeichel when another chance fell to him on his left foot, just inside the penalty area.

Subasic dashed from his line to smother one at the feet of Martin Braithwaite and Christian Eriksen clipped the frame of the goal with what appeared to be a cross which drifted off target rather an attempt to chip the goalkeeper from out wide.

Denmark boss Age Hareide, once a defender at Manchester City and Norwich, made a switch at half-time and made Croatia think again.

Christensen came off to be replaced by Lasse Schone of Ajax and changed his centre forward.

The Danes managed to engage higher up the pitch, with much more control and neutralised the Croatian wingers but giving them defensive duties to think about.

Although it did little for the game as a spectacle. The midfield areas became congested, Modric and Rakitic found it increasingly difficult to dictate the pattern of the tie and very few clear-cut chances were eked out.

Nicolai Jorgensen tested Subasic soon after coming on and long-range efforts were traded without anything else threatening to find the net, and the game drifted into extra-time in a hushed atmosphere.

Pione Sisto closest for Denmark in extra-time before Schmeichel denied Modric from the spot and took the tie into a shootout.