Brazil 2-0 Mexico: Neymar rounds off slick move to tap in opener before teeing up Roberto Firmino late on as Tite’s side cruise into quarter-finals 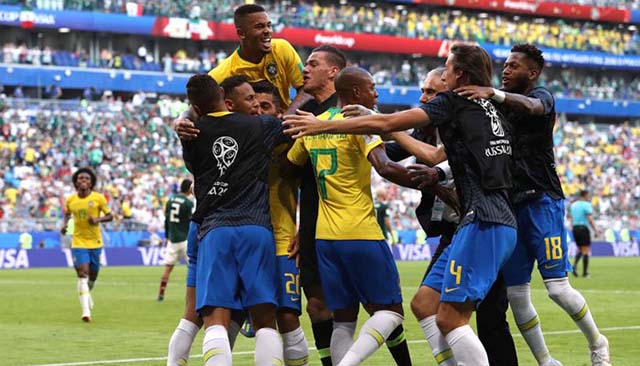 Before the game’s distance was run, there would be that kind of theatre from Neymar which stands between him and true greatness: a pitiful and deeply unattractive attempt to earn an opponent’s dismissal which will have made him a source of ridicule the world over. This is the reason why he is not loved beyond the shores […]

Before the game’s distance was run, there would be that kind of theatre from Neymar which stands between him and true greatness: a pitiful and deeply unattractive attempt to earn an opponent’s dismissal which will have made him a source of ridicule the world over. This is the reason why he is not loved beyond the shores of Brazil.

Mercifully, the Italian referee did not waste the video team’s time with the Brazilian’s preposterous claim that Miguel Layun stepped on him.

It meant that another piece of theatre – Neymar’s sublime creation and completion of a 55th minute goal – remained the match’s stand-out moment.

A moment’s vision was all the goal took. Neymar had neither signed his name across the match nor announced his presence at that stage. But he sees the game in different dimensions and having travelled with the ball across the edge of Mexico’s area, was aware of Willian’s arrival behind him, in his peripheral vision. He backheeled to him, span away, and was in the six yard box to slide home the ball that the Chelsea player – sublime here – measured expertly into the six yard box.

There had been no pretence from anyone, not even the Brazilian manager, that the nation was waiting for something better from him.

There was no doubting how desperately Mexico wanted this. Progressing beyond the last 16 to the elusive ’quinto partido’ (‘the fifth game’) has become a painful national obsession for a nation which has fallen at this stage for the last six consecutive World Cups. Rarely in those 24 long years have they started with such resolve.

The beautiful, topsy turvy nature of this tournament has had everyone believing in miracles and the central Americans went to were worked high up the pitch, having seemed to locate someone exploitable in the Brazilian defence.

They doubled up in their raids down on left back Fagner, who looked deeply uncomfortable under examination by Carlos Vela and Andres Guardado, even with Willian dropping back to help.

Guardado’s early cross had Alisson scrambling to punch it clear before Vela’s delivery from the same flank had Miranda and Casmiro in a state of confusion and struggling to cope.

Guardado, the Real Betis player, was outstanding in the first half hour, switching play diagonally to the right flank with a ball which Hirvino Lozano took down out of the sky. Javier Hernandez could not find the same level. The 22-year-old PSV player’s cross flew across the six-yard box.

Mexico pressed in relentless heat, resolved to prevent the Brazillians finding their powers of self-expression. But their hope was short-libed.

When Brazil found their measure, there was a graphic illustration in the gulf in technical class. Neymar feinted left then right on 24 minutes to unbalance Edson Alvarez and shoot. You saw then what the Mexicans were up against.

Guillermo Ochoa parried that effort and needed to find the same strength ten minutes later when Brazil, travelling up through the gears, provided the first half’s outstanding moment.

Paulino span away to allow a ball to find Philippe Coutinho, whose rapid cut back allowed Jesus to seized it, advance, fake to shoot, thendrive past Guardado and Edson Alvarez and shoot from close range.

Mexico knew what they were up against. The decision to anchor the midfield with 39-year-old Rafael Marquez was reversed at half-time, with Layun running on, and Hernandez did not last to the hour mark.

But there was no turning back the yellow tide. Mexico’s had precious few chances to break through as Willian produced the game’s outstanding performance, while Brazil continually looked capable of breaking through.

A Coutinho shot fired in after a short corner had been sharply saved and Paulinio had also gone close before Neymar’s moment of magic earned the breakthrough.

The No 10 almost doubled the lead when Willian laid the ball into his path again. Control with his studs and a first-time shot inches wide: the game was always within his gift.

He was fortunate to escape a booking his histrionics on the touchline and helped finish it just before the end.

He took a ball Fernandinho had won and laid into his path, driving into the area with it, and laying it across for substitute Roberto Firmino to score. This is the kind of self-expression we want to see from him.