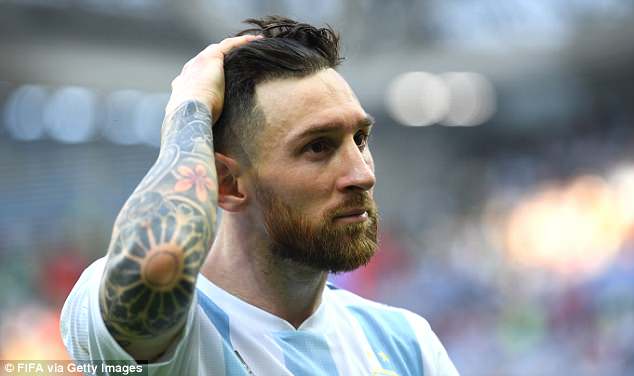 Lionel Messi’s dream of winning the World Cup has come to an end after France sent Argentina crashing out of the tournament in a seven-goal thriller in Kazan.

Lionel Messi’s dream of winning the World Cup has come to an end after France sent Argentina crashing out of the tournament in a seven-goal thriller in Kazan.

The 4-3 defeat also saw Messi fail to score in another World Cup knockout game, taking his staggering total to eight appearances where he’s failed to find the back of the net beyond the group stage.

Messi is now facing the possibility of never winning football’s greatest prize. It remains to be seen whether the 31-year-old will play at another World Cup following another dismal display by Argentina in Russia.

Despite qualifying for the knockout stages, Messi and Co never look convincing in the group stages of the competition.

The Barcelona star got off to a terrible start in front of goal after missing a penalty in the 1-1 draw with Iceland.

With hardly any support from his team-mates, Argentina slumped to a 3-0 defeat at the hands of the Croatians and were staring down the barrel of the gun, facing being eliminated during the early stages.

However, Jorge Sampaoli’s turned their fortunes around with a 2-1 win over Nigeria to send them into the knockout stages with Messi scoring a superb goal inside the opening 15 minutes.

While he did manage to contribute two assists in the four games, Messi’s dream of winning the World Cup in Russia was over after Kylian Mbappe scored a fantastic brace on Saturday to send Argentina home.

Talk of another World Cup seems unlikely for Messi, who has previously retired from the national team before donning the blue and white stripes once again.

While talk around Messi’s future with the side will continue, it was confirmed straight after the match that Javier Mascherano announced his retirement from the national team.