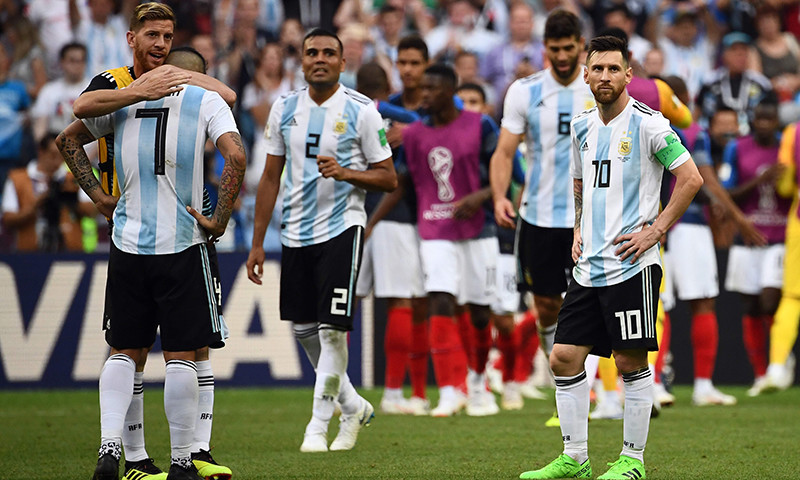 For Lionel Messi this World Cup is over. Arguably the greatest player of this and any generation traipsed off the pitch at the end of this astonishing game, his head down, his shoulders slumped, his eyes glazed, knowing that his chances of ever adding a World Cup winners’ medal to his groaning trophy cabinet are now over.

For Lionel Messi this World Cup is over. Arguably the greatest player of this and any generation traipsed off the pitch at the end of this astonishing game, his head down, his shoulders slumped, his eyes glazed, knowing that his chances of ever adding a World Cup winners’ medal to his groaning trophy cabinet are now over.

But football does not pause long. If the king is dead, long live the new king. At 19, most of us were sleeping off a hangover after spending too much of our student loan in the union bar. At 19, Kylian Mbappe has just produced the most astonishing individual performance of this tournament.

The France number 10 was everything the Argentina number 10 wasn’t here, exuding the quality that used to be Messi’s trademark: he was the man who made the difference.

Anyone who feared that, following the spirited delights of the group stage, Russia 2018 would be submerged in cagey caution should have been watching this game. It was magnificently bonkers, a heavyweight slugfest of unhinged glory, in which superb goals were swapped with a cavalier flourish, that fizzed with energy and commitment until the last second of added time. Exactly 20 years on from Argentina against England, it was like St Etienne all over again in the Kazan Arena.

The PSG striker gave his first warning that this was the game he would make his own as early as ten minutes. A lovely free-kick from Paul Pogba set him free, running at Argentina’s arthritic defence, who resorted to type, scything him down in a sandwich between Javier Mascherano and Nicolas Tagliafico. But Argentina did not – or perhaps could not – heed the warning. Not long after, he then galloped like Michael Owen in 98 from his own half into area, where he was promptly taken down by Marcos Rojo. Antoine Griezmann’s penalty was cool, calm and collected.

Argentina were not be cowed. Sure the tactics dreamed up by their managerial team of Messi and Mascherano were not controlling the game as they would wish. But they still had talent lurking. Angel Di Maria, who had given a fine impression of the invisible man for the first half hour, suddenly turned into the Incredible Hulk, smashing a thirty yard strike past Lloris for the equaliser. It was the kind of shot which, if he had attempted it while wearing a Manchester United shirt, would have endangered the occupants of the Stretford End’s Row Z.

The South Americans even took the lead when Messi finally found some space in the French box and saw his tame shot, which Lloris had well covered, spin off the heel of Gabriel Mercado into the net.

But much as the Kazan Arena resembled the Bombanero on matchday, with the stands bouncing the a blue and white thrum and Diego Maradona flying in the executive boxes, France always look likely to cease back control.

With N’golo Kante tracking Messi everywhere he went and Pogba growing more and more influential alongside him, they found an equaliser with Benjamin Pavard’s Di Maria-bettering piledriver.

But this was to be the game that announced to the world a new hero. First Mbappe danced through the leaden-footed Argentine back line to give France the lead, then he finished off the move of the tournament, which began with Lloris’s short pass and ended with his sublime shot into the corner.

When he was substituted with five minutes to go, even the thousands wearing vertical striped shirts were obliged to acknowledged that they were in the presence of the new world order.

The stats from today’s match