PSL 2020: Darren Sammy is super excited about being back in Pakistan 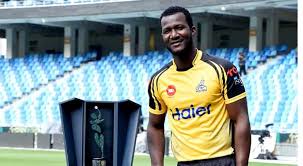 Fan favourite Peshawar Zalmi captain Darren Sammy arrived in Pakistan and he cannot wait to meet up with the team.

Fan favourite Peshawar Zalmi captain Darren Sammy arrived in Pakistan and he cannot wait to meet up with the team.

Man it is good to be back,” the Windies all-rounder said in a video posted on Twitter. “Can’t wait to see my guys.”

The 2017 Pakistan Super League (PSL) winning captain is in Pakistan to take part in the fifth edition of the tournament which gets under way on February 20.

Sammy is one of the most famous foreign players playing the PSL.

During his visit to the country last year, Sammy paid a visit to the Quaid’s Mausoleum alongside the team owner Javed Afridi.

An avid biryani fan, Sammy has often been seen expressing his love for the local food.

“I’ve been enjoying the culture from day one. I’m enjoying the experiences. I want to see the fans happy, that’s why I play cricket,” the West Indian cricketer had said, adding that he found shalwar kameez really nice to wear and liked biryani.