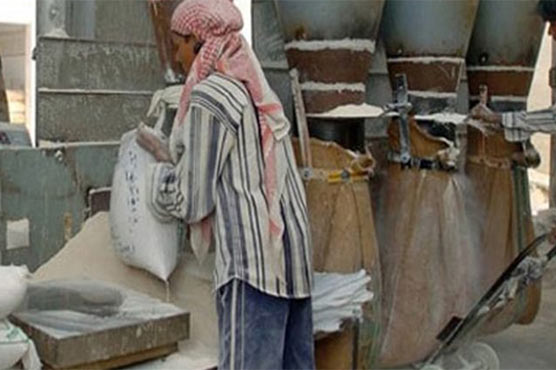 ISLAMABAD: Wheat flour price could not be controlled by the government amid a raging crisis across the country and has skyrocketed up to Rs75 per kg for the first time ever in several cities while putting tremendous burden on the general public.

ISLAMABAD: Wheat flour price could not be controlled by the government amid a raging crisis across the country and has skyrocketed up to Rs75 per kg for the first time ever in several cities while putting tremendous burden on the general public.

In several cities, including Peshawar and Hazara, nanbais (bakers) have closed their tandoors since Monday and are on strike against the government after failed negotiations with the provincial Khyber Pakhtunkhwa (KP) government.

On the other hand, nanbais demanded the price of roti (weighing 170g) to be fixed at Rs15 while claiming that wood and gas tariffs have also been increased.

In Multan, citizens are forced to buy wheat flour for more than Rs60 per kg due to its ‘artificial’ shortage in the open market.

At shops, whole wheat flour is costing Rs64 per kg whereas shopkeepers are charging white flour for up to Rs80 per kg. Nanbais, consequently, have raised roti and naan prices by Rs2 in the city.

Despite that the subsidised wheat flour is not available at specific sale points allocated by utility stores and the district administration, the administration has been claiming that 80 points were established for the provision of 10kg wheat bags with price fixed at Rs402 per bag.

The administration has further stated that action was being taken for complaints after a daily supply of 29,335 bags each weighing 20kg at those sale points.

In many cities, long queues of people were seen at the subsidised wheat flour sale points established by the local administrations.

In other cities of Punjab including Lahore, Faisalabad, Multan and Gujranwala, the wheat flour is being sold at Rs70 per kg. Within last few days, the flour’s price has increased by Rs6 in Lahore.

In Lahore, people are forced to buy flour at highest-ever price of up to Rs70 per kg, and the growers are holding the flour mill owners and the government responsible for the “Aatta crisis”.

In Faisalabad, the flour prices have skyrocketed with an increase of up to Rs30 per kg as wheat supply to mills has been suspended.

Other nanbais’ associations in Punjab have given an ultimatum to the government asking it to provide them flour at the previous rate or they would raise the prices of naan and roti.

Shockingly, earlier, Provincial Minister of Punjab for Food Sami Ullah Chaudhary has denied reports of wheat flour shortage in Punjab by stating that “wheat flour at the official rate of Rs805 per 20kg is available”. “We are ready for cooperation with Sindh and Khyber Pakhtunkhwa […] Punjab should not be punished for someone else’s incompetence.”

On the other hand, the provincial food department and the district administration of Lahore have jointly formed a plan to provide “relief” to the public of the city amid the prevailing crisis, and have supplied 10,000 bags of wheat flour to ten model markets.

In Sindh, due to the disruption in supply of wheat to the mills, the price of wheat flour bag of 100kg hit a record high of up to Rs5,300 within three months after an increased of Rs1,300.

Contrarily, the Sindh government held the federal responsible for the wheat crisis and subsequent increase in flour prices.

The flour grinding vendors (Atta Chakki owners) refused to sell flour below the price of Rs70 per kg keeping in view of massive increase in 40kg-wheat price to Rs2,150.

Despite so-called measures taken by the government, the “wheat crisis” has been prevailing across the state, and even relief centers could not provide aid to citizens and brought more misery for the common man.

The crisis has become severe just a day after PM Imran ordered the provincial governments to play an active role in curbing food prices, profiteering and hoarding.

After the government understood urgency of the crisis that required swift action, the Economic Coordination Committee (ECC) yesterday approved the import of 300,000 tonnes of wheat without regulatory duty to relieve a shortage of flour supplies that has created an unprecedented crisis.

Advisor to the Prime Minister on Finance Abdul Hafeez Shaikh chaired a meeting of the ECC of the federal cabinet to deliberate on a six-point agenda, particularly concerning the shortage of wheat flour and wheat supply to the mills.

The committee has ordered wheat import with the first shipment expected to arrive by Feb. 15, the finance ministry said in a statement, adding that it would wave regulatory duties on the grain, which could be shipped in until March 31.

The ECC also directed the Punjab government and the Pakistan Agricultural Storage and Services Corporation (Passco) to release wheat stocks in order to mitigate the crisis.

A statement issued by the finance ministry added that Punjab and Passco have approximately 4.1 million tonnes of wheat stocks available.

Prices of flour and bread shot up last week as the ingredient disappeared from shops and wholesale markets, while bread makers shut in protest at what they called government pressure to sell the staple at controlled prices.

Economic experts say it made no sense to export the wheat after poor crop yields in the last harvest, and called for an inquiry into the exports despite the ban.

“Someone made billions,” said opposition party leader Khawaja Asif said, adding that he suspected the wheat crises might be the result of a scam.

How the flour crisis in Punjab came to light?

Important revelations were made that the wheat stock was sent from Punjab to other provinces and Afghanistan. Despite the ban, food and district officials have been involved in exportation of the flour. The food department was already aware of the flour crisis but failed to take an action, and the flour crisis took place due to differences between bureaucracy and public representatives. The food authorities also submitted a fake report following bureaucracy’s inapt behavior regarding the concern.

Rising wheat prices have drawn sharp criticism of PM Imran Khan’s government, already under tremendous pressure after a key party in his coalition government quit his cabinet, and other allies also raised questions over the government’s performance.

Prime Minister Imran Khan taking notice of the reports about an uncontrolling surge in prices of flour, has ordered a nation-wide crackdown on hoarder and profiteers to curb the flour crisis.

He directed the concerned officials to effective steps in order to stabilize the prices of flour. He ordered to take strict and indiscrimination actions against profiteers. “Profiteers won’t be forgiven,” the premier is reported to have said, while ordering arrests of persons involved in illegal hike of wheat flour prices.

PM Imran emphasized on arresting and selling the warehouse of elements involved in illegal hike of the wheat flour’s prices.

PM Imran took notice of the matter and designated Jahangir Tareen and Minister for National Food Security and Research Khusro Bakhtiar to look for an immediate resolution over the inflation-related crisis.

Both politicians have been directed to seek solution to ensure the decrease in the prices of flour.

The premier has tasked Tareen and Bakhtiyar to seek counsel from the Chief Minister of Punjab and Khyber Pakhtunkhwa and come up with worthwhile results to the issue.

The federal government is mulling releasing 1 lac ton of wheat from the quota of Pakistan Agricultural Storage and Services Corporation (PASSCO).

Pakistan is a mostly agricultural country that normally grows enough to meet the needs of its population.

Opposition parties and some economists have called for an inquiry into why Pakistan needs to import wheat when it was exporting the grain until late last year.